Andrea Canning is a renowned Canadian-American journalist who has worked for ABC News from 2004 until April 2012. After covering various morning broadcasts for the network, she switched to NBC News in October 2012. Formerly a competitive skier from Collingwood, Ontario, she has been actively working as a correspondent of ‘Dateline.’ Interestingly, Andrea has utilized her varied experiences as an anchor as well as a liking for pop culture and entertainment to write or co-write screenplays for Hallmark and Lifetime.

Starting in 2016, the talented correspondent now boasts of having penned down over a dozen movies such as ‘Two for the Win,’ ‘Deep Fake,’ ‘House of Deadly Secrets,’ and ‘USS Christmas.’ She has also displayed her acting prowess in ‘A Daughter’s Revenge’ and two television films in the ‘Ruby Herring Mysteries’ series titled ‘Prediction Murder’ and ‘Her Last Breath.’

Andrea’s profession has included reporting on various high-profile stories like the Boston Marathon bombing, Hurricane Katrina, and Sandy Hook Elementary School shooting. The stories even take her across the country, from Mustang, Oklahoma, to 29 Palms, California. For someone whose job is to cover mysteries, documentaries, and real-life crime stories adeptly, we, for one, believe that Andrea has had an equally exciting love story. Here is everything you need to know about it!

Andrea Canning and Her Husband: How Did They Meet?

Andrea Canning met her now-husband, Lt. Col Anthony “Tony” Bancroft, at a point in time when her career had taken center stage in her life. The professional commitments became so time-consuming that they practically took a toll on her romantic life. When the correspondent moved to Washington in 2005 to join ABC NewsOne, she was in her early 30s and had begun to lose hope. But Martha Raddatz, Chief Global Affairs Correspondent ABC News and her co-worker, played the matchmaker for Andrea by introducing her to a handsome then-Marine fighter pilot from Oxford, New York.

Captain George Anthony “Tony” Bancroft II had been deployed for seven-months at Camp Victory in Baghdad when he crossed paths with Raddatz in Iraq. She was impressed by Captain George Anthony Bancroft II’s grounded demeanor, and after an insightful conversation, knew him to be “the perfect person” for her friend, Andrea. However, Andrea took her time to digest the idea despite having exchanged a few emails and casual phone calls with Bancroft.

The journalist could not see it shaping into anything concrete and even asked for a picture of her “pen pal.” While Bancroft gently ignored her request, destiny had its own plan as she luckily found a still photo from his stint as an extra on ‘The West Wing.’ His face and his “dreamy” stance left her intrigued. Andrea and Bancroft finally met for the first time in Annapolis, Maryland, over the Thanksgiving weekend of 2006. It was love at first sight for both of them, and he gushily confessed that “The first time I saw her, I thought this girl is so beautiful, I could see being with her.”

Andrea Canning and Her Husband: Journey Together and Children

Tony Bancroft was completely enamored by Andrea Canning’s confidence, which clearly showed how comfortable she was in her own skin. The picture-perfect beginning of their relationship was as beautiful as their journey thereafter. The couple started dating right away, and after a few weeks, Andrea’s beau traveled all the way to Collingwood to meet her family. 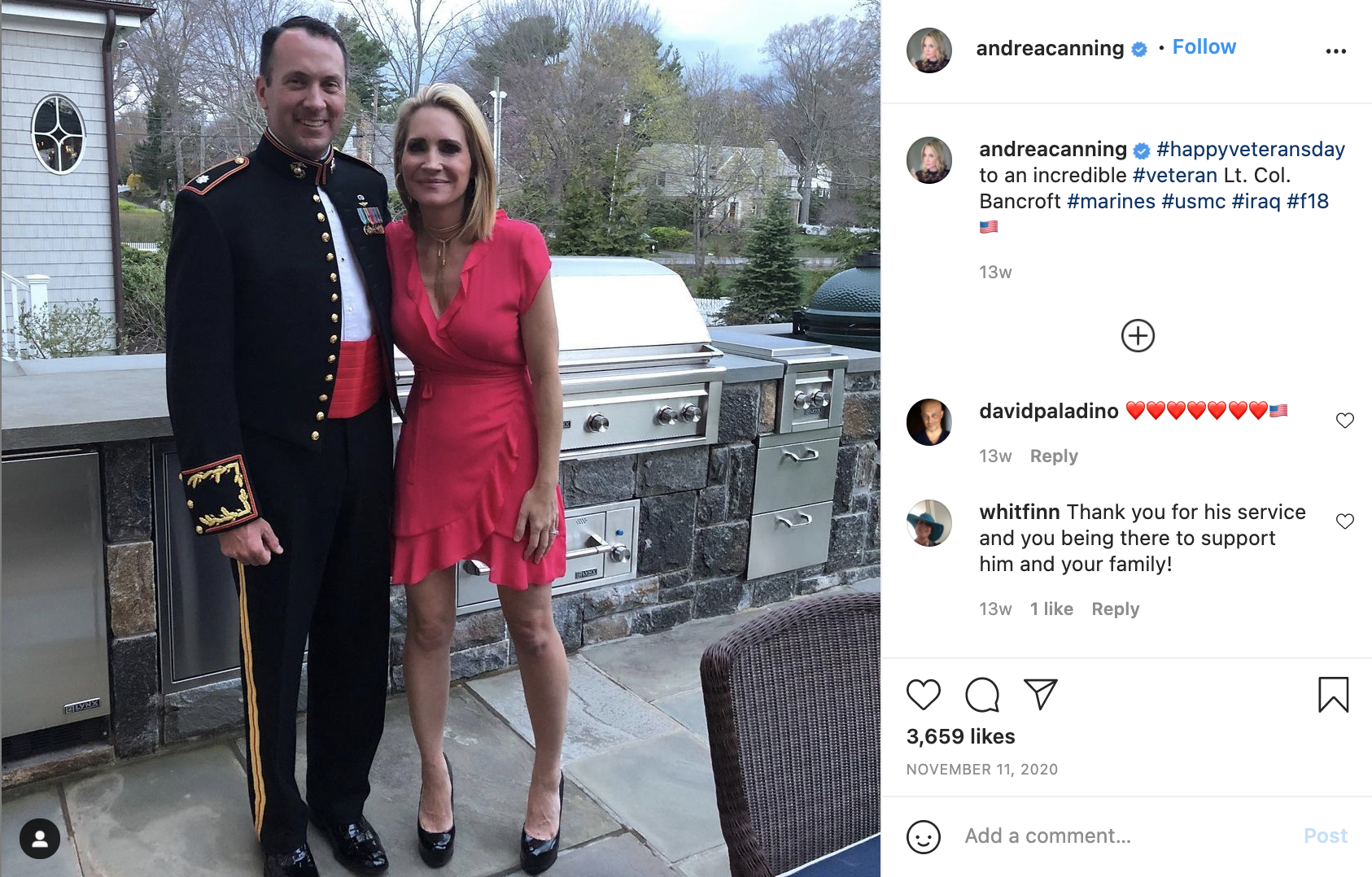 Unfortunately, in less than two months since the two started seeing each other, the Canadian-born journalist hit a rough patch after losing her mother, Katherine Canning, to breast cancer. However, she was able to comfort her mother on the day she died by her final words to her: “…I found someone to spend the rest of my life with,” referring to Bancroft. As expected, he stood by Andrea’s side through the tough time, and they still continue to love each other deeply.

Bancroft made her the happiest by popping the question in September 2007 at his family vacation home on Cuttyhunk Island, Massachusetts. On June 7, 2008, the adorable couple shared their wedding vows at the Blue Mountain Inn, the very resort owned by the bride’s family where the groom had met them the first time. At the time of the wedding, Bancroft was a flight instructor at the Marine Corps Air Station Miramar, near San Diego but is now a financial analyst.

Andrea and Bancroft cherished their lives as newlyweds before welcoming their first baby-girl, Anna Katherine, in March 2009. The duo went on to become proud parents to four more daughters: Charlotte “Charlie” Brewster (May 19, 2010), Christina “Kiki” Margaret (August 3, 2012), Georgia Rapalje (February 27, 2014), and Elle Corbin (May 27, 2015). Their independent careers and a bunch of children, who are all dearest to them, have kept them extremely busy.

However, Andrea and Bancroft had always yearned for a boy. Their wish got fulfilled on June 18, 2019, when they welcomed George Anthony ”Tripp” Bancroft III. After five natural pregnancies, Andrea had her sixth child and first son through in vitro fertilization (IVF). The family of 8 thoroughly enjoys their time together by playing golf and soccer in addition to happy-dancing and going on playdates.

Read More: Is David Muir Married? Does He Have Children?