‘Remember the Titans’ is perhaps one of the most uplifting sports films. Denzel Washington’s charismatic turn as Herman Boone, a football coach of T.C. Williams High School in Virginia, makes this film an enthralling watch. The football team overcomes difficulties amidst racial tensions and rise above prejudices to charter a historical path to success. Boone has his own challenges as he has the daunting task of unifying the team and being accepted as the head coach. Paired with uplifting music and historical tenor, ‘Remember the Titans’ is apt to its name. So, how much of the story is true to its depiction? Read on to know more!

Is Remember the Titans Based on a True Story?

Yes, ‘Remember the Titans’ is based on a true story. It is based on the exploits of a real-life football coach, Herman Boone, who coached the T.C. Williams High School to the Virginia High School League football championship in 1971. In 1971,  Alexandria integrated all its high school students into T.C. Williams High School, which became the only school catering to 11th and 12th graders. The integration didn’t happen right before the football season, as shown in the film. Students were jostling for positions in the school football team in the newly integrated atmosphere. Their head coach Bill Yoast had to step down to make way for Herman Boone, a new African-American head coach. Slowly, they developed a working partnership, as Boone said in an interview, “I didn’t know Yoast. Yoast didn’t know me. I knew that Hammond had no black athletes, and I didn’t know if coach Yoast had anything to do with that. But we got to [training camp] and became roommates and found a way to talk to one another.”

The overall premise of the film stays true to the origin story. However, certain facts have been dramatized in the film to evoke a melodramatic effect. Most of the film characters are based on real-life people, but some were written specifically for the script. For example, Alan Bosley (Ryan Gosling), who gives up a spot to his teammate, is a fictional character. Moreover, Bill Yoast is shown to be a father of a single child, whereas he has sired four daughters. He had registered his protest with the filmmakers, but Sheryl’s sisters had agreed to the change. Unfortunately, Sheryl died due to an undiagnosed heart problem in 1996, even before the filming began.

Apart from such cinematic liberties, a major deviation from history is the story about All-American player Gerry Bertier. It is shown in the film that Gerry meets with a car accident before the championship game, which paralyzes him. In fact, Gerry had actually played the championship final and was honored for his participation. On December 11, 1971, he met with an accident when his car hit a fire hydrant as it veered out of control. The accident had left him paraplegic. The film correctly shows that he died ten years after his accident. Gerry Bertier died in a car crash on March 20, 1981. 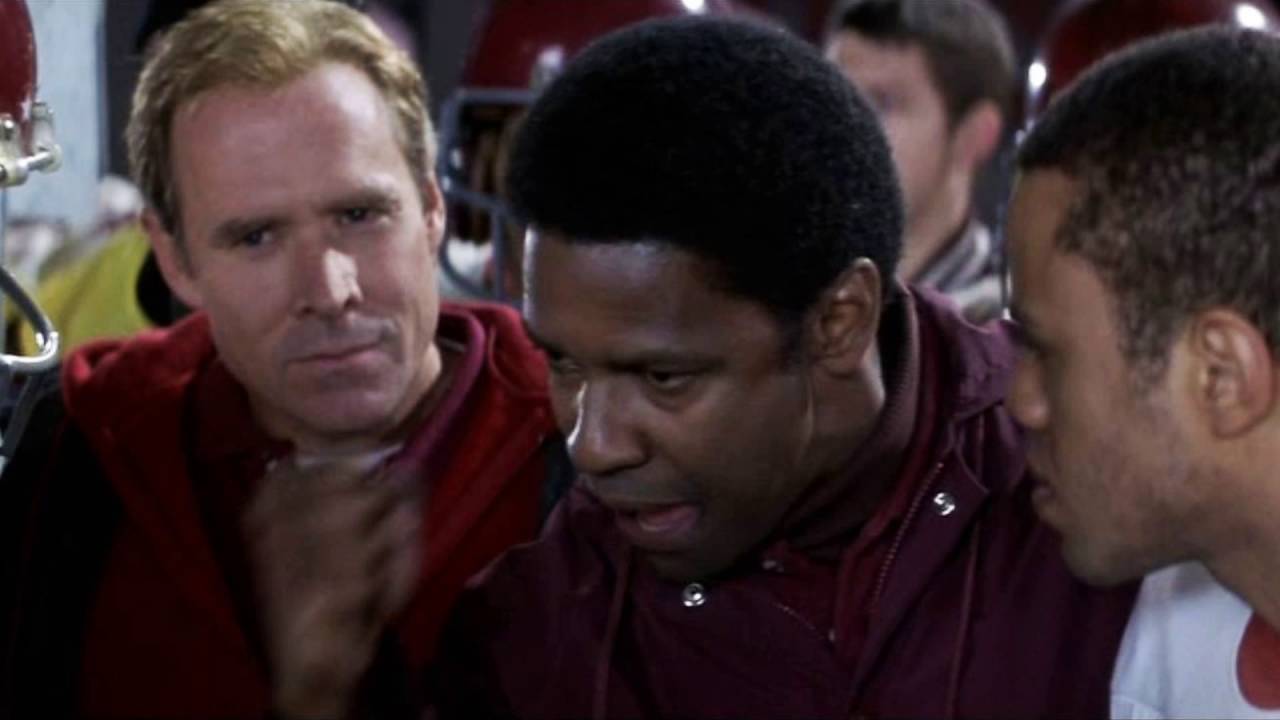 The depiction of racism in the film has been a cause of debate. Virginia is portrayed as a place of overt racism.  Some of the film’s characters are discriminated against in certain scenes. Even the students have to overcome their own prejudices to integrate into a cohesive team. On the contrary, Alexandria had become a cosmopolitan city back then, where many racial borders had been broken. That’s not to say that racism didn’t exist at all; it definitely did.

Even though it roughens the smoother edges of history, the film depicts certain instances that had actually happened. Boone acknowledged that he had indeed integrated the school buses such that team members could get to know each other better. Boone also throws light onto the fact that his window was attacked with a toilet stool rather than the brick shown in the film. He said that the producers had glossed out this aspect because of its repulsiveness.

In the end, we see the officials trying to sabotage the final game so that Titan’s loss can pave the way for Boone’s dismissal. Yoast nullified it by saying that there was no such overtly racial misdemeanor during the matches. To make the final more interesting, the match is depicted as a comeback for the Titans. Real-life Titans had actually routed their opponents Andrew Lewis High School 27-0 to win the final at Victory Stadium in Roanoke, Virginia. Apart from such changes, Gettysburg’s training camps fairly resembles the actual processes that led Titans to victory. Even though the film takes some extended liberties, it records an important moment in American history for ages to come.

Read More: Where Was Remember the Titans Filmed?