‘Finding ‘Ohana’ is a heartwarming family adventure film that tells the story of Pili (Kea Peahu) and her older brother Ioane (Alex Aiono), who move to Oahu from New York along with their mother Leilani (Kelly Hu). Their grandfather Kimo (Branscombe Richmond), has recently suffered a heart attack, and the family returns to the island to take care of him. Eleven years ago, Leilani left Oahu with her children not long after receiving the news that her husband, Kua (Brad Kalilimoku), a military officer, had been killed in action.

Since then, Pili and Ioane have grown up in New York, completely alienated from their native culture. They can’t speak the Hawaiian language and have a superficial understanding of the islands’ traditions and mythology. On the island, the children learn that Kimo has encountered some financial issues and faces the risk of losing the family’s ancestral land because of it. Ioane is genuinely surprised when his mother tells him that she is seriously considering the option of selling their Brooklyn apartment and moving permanently to Oahu.

When he, his sister, and their friends discover that the treasure mentioned in Monk’s journal is real, they figure out that many of their problems will be solved if they were to find it. Upon its release, the film received praise from the critics for the performances by the members of the main cast and the direction of the filmmaker Jude Weng in her feature directing debut. If ‘Finding ‘Ohana’s realistic depiction of a family’s struggle to overcome various issues has made you wonder whether it is based on real-life events, here is what we have been able to find out.

Is Finding ‘Ohana Based on a True Story?

No, ‘Finding ‘Ohana’ is not based on a true story. Weng made the film out of a screenplay developed by Christina Strain, who is most known for her extensive work as a colorist on numerous Marvel Comics projects. Although the film has obvious fantastical elements in its climactic scenes, it is mostly about a family’s earnest struggle to deal with its inherent dysfunctionalities and financial woes. After they arrive in Oahu, both siblings feel that they don’t belong there.

The drastic contrast between their Brooklyn upbringing and Hawaiian roots is underscored as they search for the treasure, and myth and reality meld into one entity. The hunt for the treasure serves both as a lesson and a trial. It effectively helps Pili and Ioane understand who they really are. The eternal struggle between tradition and modernity is played out on a microcosmic level in this film. After discovering that the cave is actually a tomb, and hence a sacred place, Pili, Hana (Lindsay Watson), and Casper (Owen Vaccaro) decide to leave the treasure behind. 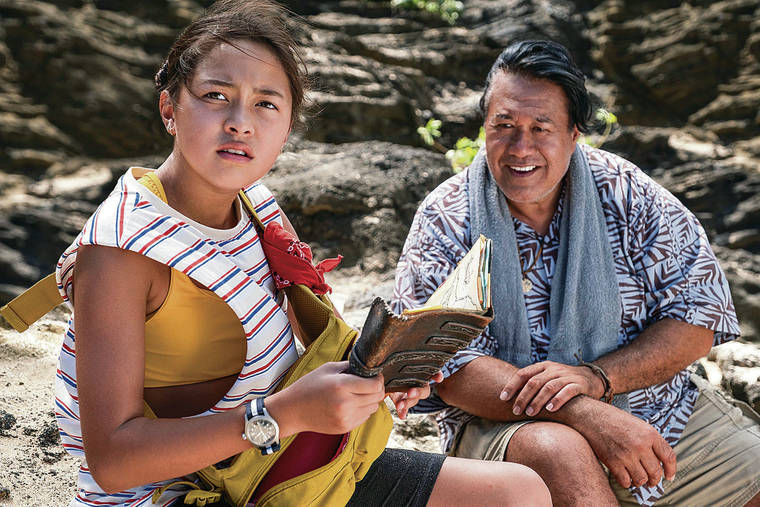 However, Ioane, a perfect embodiment of modern cynicism, refuses to do so. It takes his father’s appearance as a Nightmarcher to convince him that the world is much more complex than what he initially thought. ‘Finding ‘Ohana’ is a celebration of every aspect of Hawaiian culture. From music to food to mythology – the film invests time and care to showcase them all. Over the years, there have been some other movies that earnestly portray the Hawaiian way of life.

The 2004 romantic comedy ‘50 First Dates,’ starring Adam Sandler and Drew Barrymore, is set in Oahu. While the main protagonists are not Hawaiian natives, the film faithfully depicts the warmth and generosity of the people of the region. ‘Finding ‘Ohana’ is also an exceptional treasure hunting film with a mostly non-white cast, which is quite unprecedented. Representation is important, and it seems that Hollywood has more or less embraced that notion in recent years. These days, children and young adults are being inspired by characters who look like them.