‘Resident Alien’ is a humorous tale of an alien (Alan Tudyk) crash landing onto Earth’s surface and the following misadventures that shake up his life. He is stranded in the heart of a desolate town called Patience in Colorado, where he cultivates an identity for himself as Dr. Harry Vanderspeigle. Endowed with a mission to wipe out humanity, he gets closer to humans, inspecting and monitoring their ways. But he gradually becomes attached to his new life and is tormented by a moral dilemma regarding his plan to kill humans.

The story kicks off in a languid little town that looks just like any other town on the surface. But unknown to its simple-minded residents, there is crime hidden in its underbelly. What adds more detail to the story is the changing landscape. At one moment, there is a group of lawmen investigating murders on the riverside. During other times, there are people on the streets going about their lives, giving in to the illusion of normalcy. Without further ado, let us take a look into its filming locations.

‘Resident Alien’ started filming in the fall of 2018 before it was greenlit for a series order, according to social media. After that, it was picked up in the fall of 2019, and it carried on for a while until the pandemic disrupted it. The production subsequently resumed in September 2020, under strict pandemic protocols. The filming seemingly wrapped up filming on October 7, 2020. ‘Resident Alien’ was shot in British Columbia. Let’s discover more details.

The series is primarily filmed in Vancouver Island, British Columbia. The fictional town of Patience was materialized in Ladysmith, originally Oyster Harbour, which is a town located towards the north on the east coast of Vancouver Island. A studio located on Derwent Way Delta was used prominently for the shoot. In January 2020, the production filmed an episode on 1st Avenue in Ladysmith.

The street is lined with retail stores and eateries, out of which Left Coast Fashions, a shopping center, shared a few filming moments on social media. There were posters put up marked with “Patience,” and a few shops were renamed. Another shop called Neck of the Woods, situated at 28 Roberts Street, flaunted its remodeled setup during production through pictures posted on social media. The shops on the street were modified using graphic imprints, and American flags were put up in the corners.

Transit routes will be detouring using 2nd Avenue instead of 1st Avenue until end of day Friday due to the Resident Alien filming. The bus stop at 49th Parallel Grocery remains open.

The series is partially filmed in Vancouver, British Columbia. The city is an urban center engulfed with nature and is known for industries in forestry and tourism. Cast and crew members shared their enthusiasm through pictures from the second phase of filming, which commenced in the fall of 2019. The pandemic thereafter disrupted it.

After filming resumed in the latter half of 2020, the series was filmed with emphasized attention given to safety protocols amid the pandemic. Actor Alan Tudyk revealed that their temperatures were monitored every day. The series was partially filmed on top of a mountain, as stated by the actor. He shared a picture of the location wherein he is perched upon a bed of rocks and snow, plastered against a hazy sky. 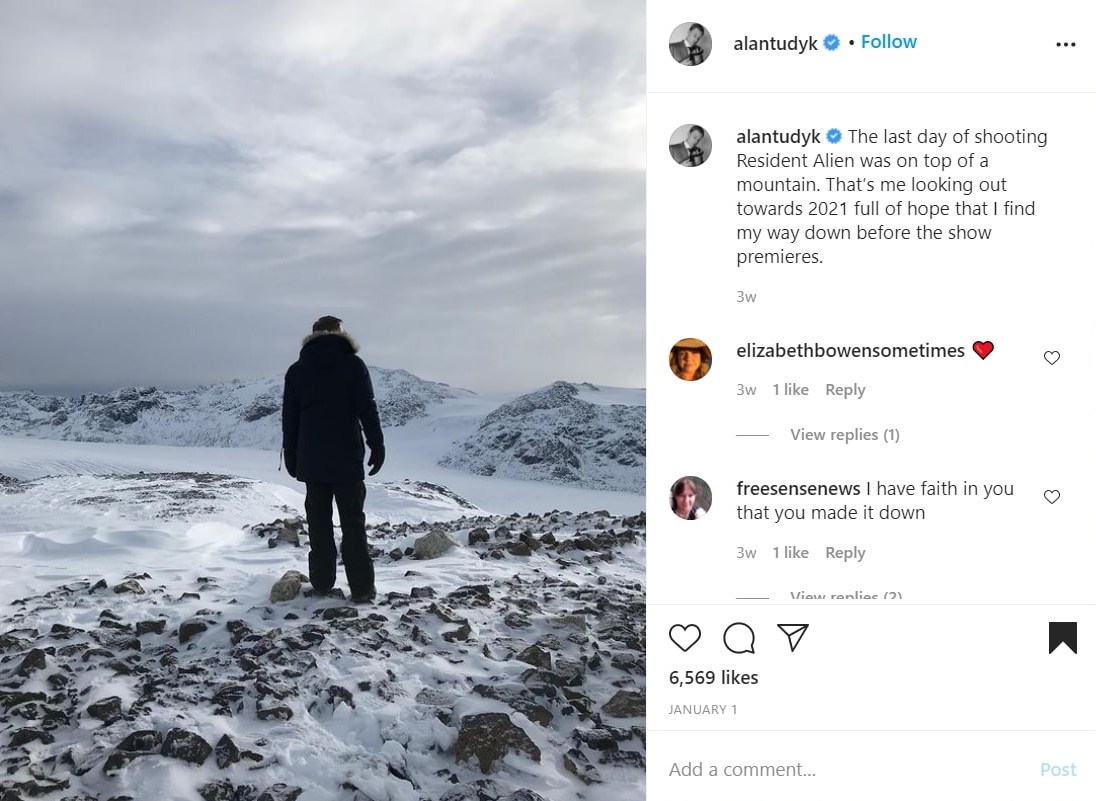