Danielle Colby-Cushman is a reality TV personality, a burlesque performer, and the manager of Mike Wolfe’s Antique Archaeology store. Danielle is one of the main cast members of the History channel’s long-running reality series ‘American Pickers.’ Danielle was born on December 3, 1975, in Davenport, Iowa. Danielle was raised as a Jehovah’s Witness, but she chose to leave the doctrine when she got older.

She used to be married to an Englishman named Robert Strong, and they have two kids together – a boy named Miller and a girl called Memphis. Danielle and Strong divorced shortly after she started her television career and gained widespread fame. In February 2015, Danielle married Alexander De Meyer, a French artist, but the couple ended their union and went their separate ways two years after their wedding. In December 2020, Danielle got engaged to her current boyfriend, Jeremy Scheuch. Curious to know how Danielle Colby-Cushman amassed her wealth and what her current net worth is? Here’s all you need to know.

How Did Danielle Colby-Cushman Make Her Money?

Danielle began her career as a professional burlesque dancer. When she lived with her family in Chicago, Danielle attended a burlesque performance that featured comedian Margaret Cho and dancer Satan’s Angel. Watching that show ignited her passion for becoming a burlesque dancer, and she created a stage name for herself – Dannie Diesel. After she moved back to Iowa, Danielle put together Burlesque Le Moustache, a professional dance troupe of nine performers. Danielle also founded Dannie Diesel’s Bump ‘N Grind Academy, a training institute for aspiring burlesque dancers, in Chicago.

Danielle also pursued her interest in vintage fashion design by opening and running a retro clothing company known as 4 Miles 2 Memphis. In 2013, she operated a brick-and-mortar store in the Wicker Park area of Chicago; however, the shop closed within a year. Danielle has also been the owner and member of a female roller derby team called the Big Mouth Mickies. She participated in roller derby for three years before injuries forced her to quit. 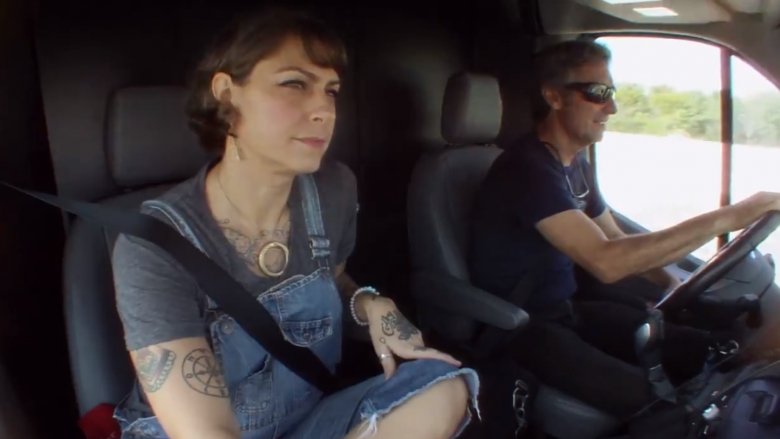 Danielle was a friend of ‘American Pickers‘ co-host Mike Wolfe for years before the show was even thought of. When the show was in the developing stages, Mike asked Danielle to be the manager of his store Antique Archaeology. The show premiered in January 2010 and catapulted Danielle into far-reaching fame, making her a household name. As the manager of Antique Archaeology, Danielle is responsible for drawing up the business plans with Mike and his co-host Frank Fritz, setting the budget that the guys can spend when they go picking and finding the spots where the guys go to pick. She also takes care of the store when Mike is away hunting for vintage treasures.

As of 2021, Danielle Colby-Cushman’s net worth is estimated to be around $1.5 million. Reportedly, she gets paid a salary of $15,000 for every episode she appears on.

Read More: Everything We Know About Danielle Colby-Cushman