Arguably the terrifying aspect of ‘The Promised Neverland’ is not the demons themselves or the fact that they consume human flesh, but the disturbing familiarity of their efficiency in farming their food. Honestly, this anime is bound to make you consider going vegan (or vegetarian) at least once. The series revolves around a group of young orphans who discover one day that they are being raised to be served as food on the platters of demonic beings. The children subsequently escape the orphanage, the only place they have known in their secluded lives, and venture out into the mysterious and dangerous world beyond.

After season 1 was released on January 11, 2019, ‘The Promised Neverland’ garnered widespread positive reviews, with critics praising it for its concept, execution, and style. It returned with season 2 on January 8, 2020. Here is everything you need to know about the upcoming episode of the anime.

The Promised Neverland Season 2 Episode 3 Release Date: When Will It Premiere?

The 3rd episode of ‘The Promised Neverland’ is set to release on January 22, 2021. CloverWorks Studios produced the series, with Mamoru Kanbe serving as the director and Kaiu Shirai as the primary writer. Takahiro Obata provided the music, and Kazuaki Shimada created the character designs. Kiiro Akiyama sang the opening theme track “Identity,” and Myuk sang the ending theme track “Magic.”

Where Can I Watch The Promised Neverland Online?

Season 2 Episodes of ‘The Promised Neverland’ with original Japanese audio and English subtitles are made available on Funimation (North America), AnimeLab (Australia and New Zealand), Hulu (North America), and Wakanim (Scandinavia) on the day of their airing in Japan on Fuji TV’s Noitamina and its affiliated channels. Funimation also has Portuguese (Brazil) and Spanish (Mexican) subtitled versions for its viewers in South America. French, German, and Russian viewers can watch the series with their respective language subtitles on Wakanim. Viewers in Southeast Asia can watch season 2 on iQIYI. Italian viewers can catch the series with Italian subtitles on VVVVID. An English dubbed version of season 1 is also available on Funimation.

The season 2 premiere ended on a cliffhanger, with Ray and Emma realizing that their saviors are demons. In episode 2, we learn that Mujika and Sonju are part of a religious sect that forbids them to consume human flesh. In demonic society, they are considered heretics. Later, when the rest of the children are asleep, Ray and Emma go to talk to Sonju, who explains to them that there was a time when humans and demons were at war.

Ultimately, humans suggested a truce between the two races by segregating their worlds. It has been about a thousand years since the implementation of that agreement. The children are the descendants of people left behind in the demonic world as a token for the promise that the demons will not hunt humans ever again. Since then, humans have been farmed in facilities like Grace Field House on the demonic side. 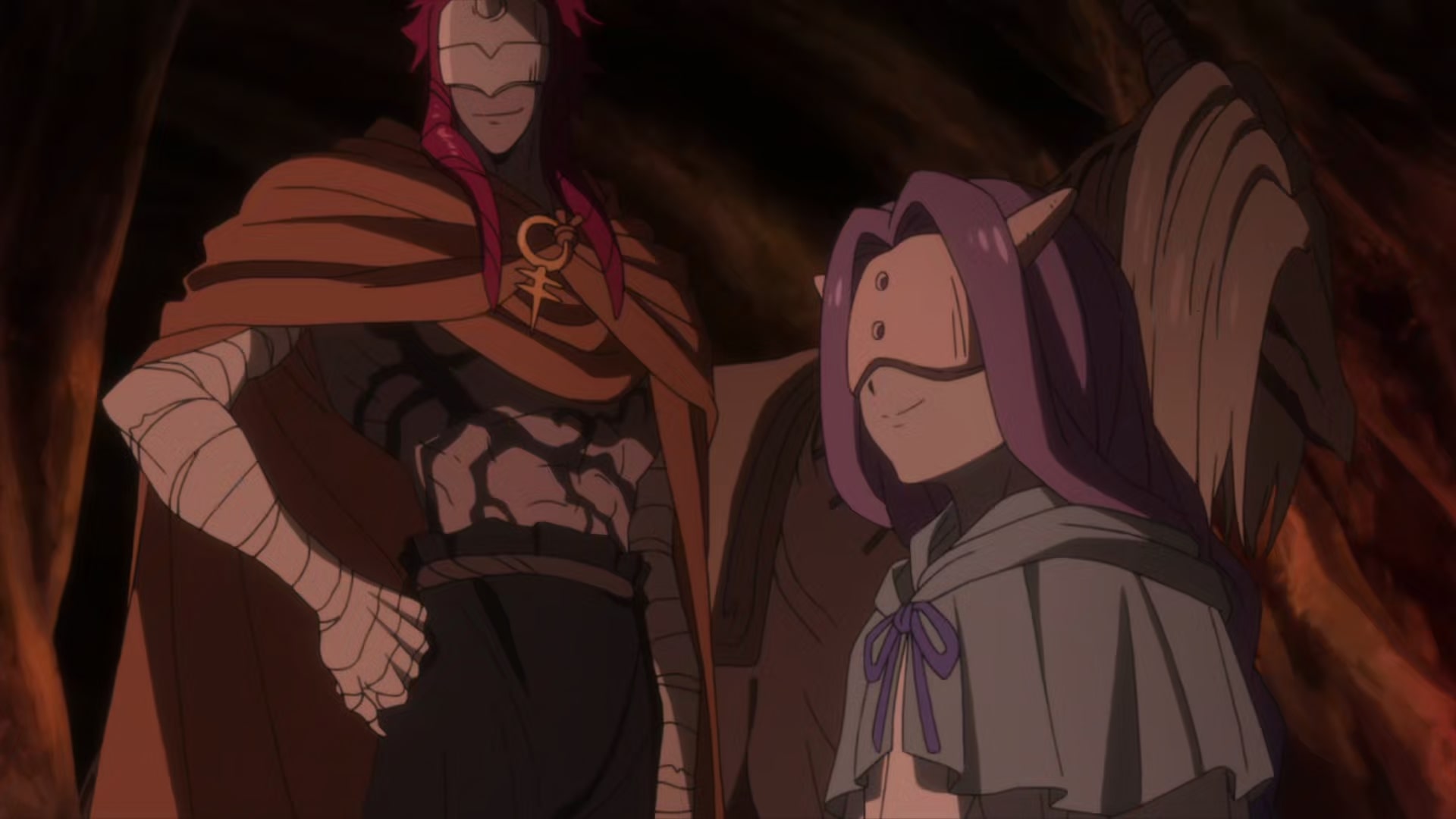 Surprisingly, hearing this bleak truth about their world doesn’t depress or horrify Emma and Ray. Instead, they are excited by the prospect of a world only inhabited by humans. Sonju cautions them that no one has crossed between the two worlds since the agreement, as it was one of the stipulations in the deal. But that doesn’t hamper the children’s mood. They tell Sonju that they will find some way to get into the human world.

Ray and Emma reveal to the other children what they have learned. Emma swears that they will get the children out from the other farms and escape to the human world together. When one of the older children voices his doubt, Emma assures him that she knows that it will not be easy, but they will succeed. The two demons guide the children through a maze of underground tunnels. Later, Sonju and Mujika teach the children some important survival skills. Emma accompanies Sonju to a scouting venture to the surface and asks him to teach her how to hunt and kill. 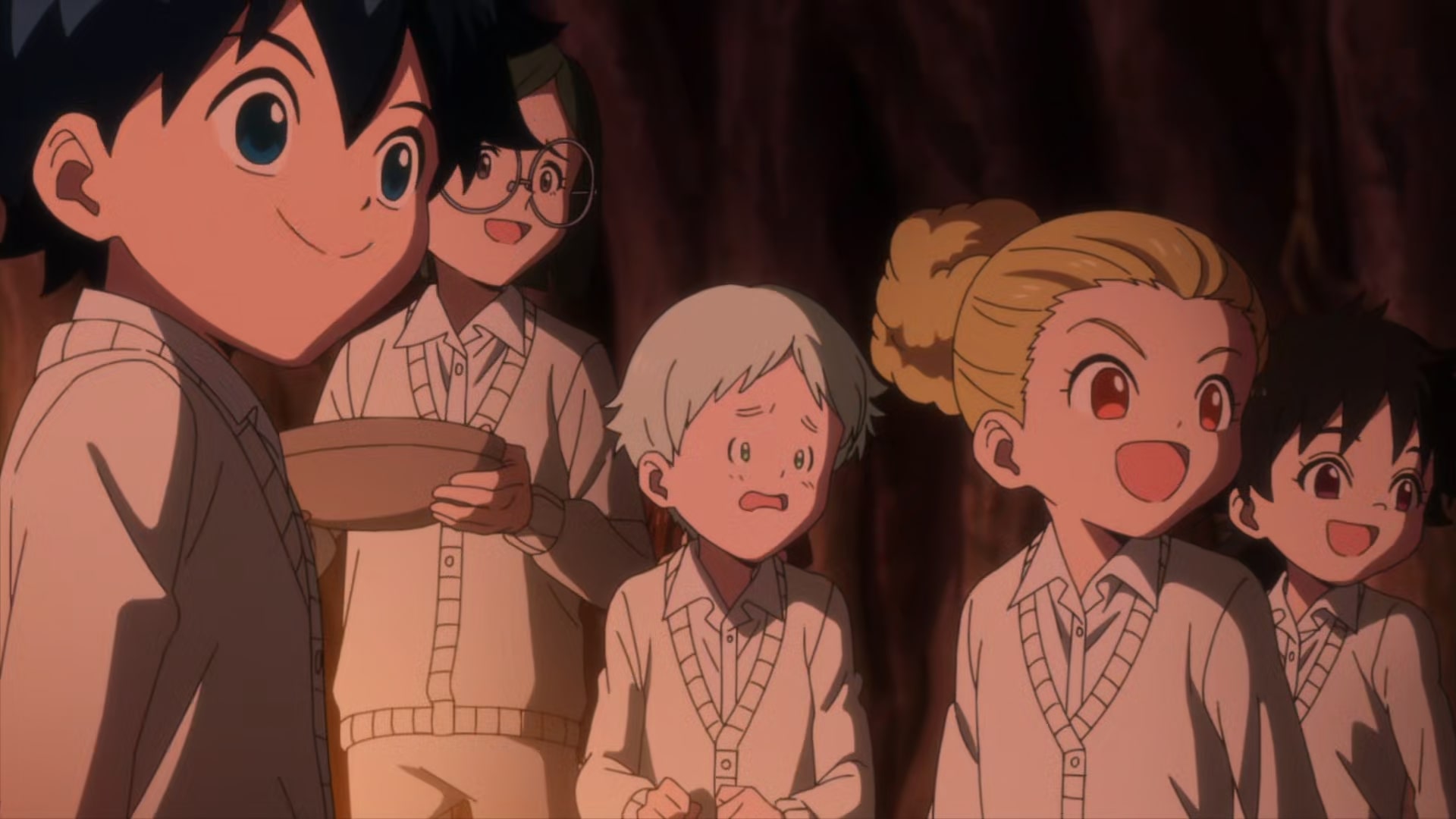 Emma manages to shoot down a bird, and Sonju convinces her to perform a ritual known as “Gupna,” in which the sharp stem of a Vida flower is planted into the prey’s chest. The flower sucks out all the blood and turns to a brilliant shade of red. As Sonju explains, this is part of their religion, a way of offering gratitude to their gods for the meal. This also improves the longevity of the meat. Emma suddenly recalls that she and Norman saw the same flower on Connie’s chest. When she returns, even the young ones can tell that something has deeply disturbed her, but Emma assures them that it’s nothing.

In episode 3 of season 2, the children might learn more about demons and their culture from Sonju and Mujika. They later might make their way through the wasteland to reach the destination.