During the worldwide lockdown caused by the pandemic, most of the people were struggling to remain productive, but not the team that came together to make the romantic-comedy heist film, ‘Locked Down.’ The film revolves around Linda (Anne Hathaway) and Paxton (Chiwetel Ejiofor), who are struggling with their marriage but are forced to stay together during the mandatory lockdown.

An unexpected opportunity presents itself as the couple is required to handle valuables at a department store, including a diamond worth three million pounds. Are you wondering where and when the movie was filmed? You might find it fascinating to learn what we know!

Set during the pandemic, the film was also shot in the early months when Coronavirus was wreaking havoc all over the world. The principal photography was carried out within a period of 18 days from September to October 2020. Here are the details about the filming locations!

‘Locked Down’ was filmed on location in London, England. Since all studios and local businesses were closed due to the pandemic, the movie used real locations for filming. The department store, Harrods Limited, located on Brompton Road in Knightsbridge, London, is a key filming location. The store sits on 5 acres of land and comprises 330 departments that cover 1.1 million square feet of retail space.

COMING SOON | #LockedDownFilm, starring Anne Hathaway and Chiwetel Ejiofor, was set and filmed in the one-and-only #Harrods. When the world is locked down, they’ll find their ticket out. Streaming on HBO Max from 14th January and coming soon to Sky. pic.twitter.com/72GUjY08lX

The production team was delighted when they got approval from Harrods – which sees up to 300,000 customers on peak days – to carry out filming. This means that shooting there would have been next to impossible if the lockdown had not forced it to close down. In fact, this is the first film ever to be shot at the world-famous store. Talk about seizing the opportunity! Since no extras could be hired for filming, employees at Harrods and obliging civilians stepped in for scenes whenever required.

The movie also depicts the realistic nature of the interaction between people during the lockdown, such as physical distancing, working from home, and staying in touch through phone calls and video calls. Supporting actors feature in the film mostly via video calls, which helped maintain the safety of the cast and crew members who were filming. They filmed their scenes on laptops since most of the actors were in quarantine in different places. To keep the filming quick and efficient, the lead actors taped dialogues on each other’s costumes to remember their lines. 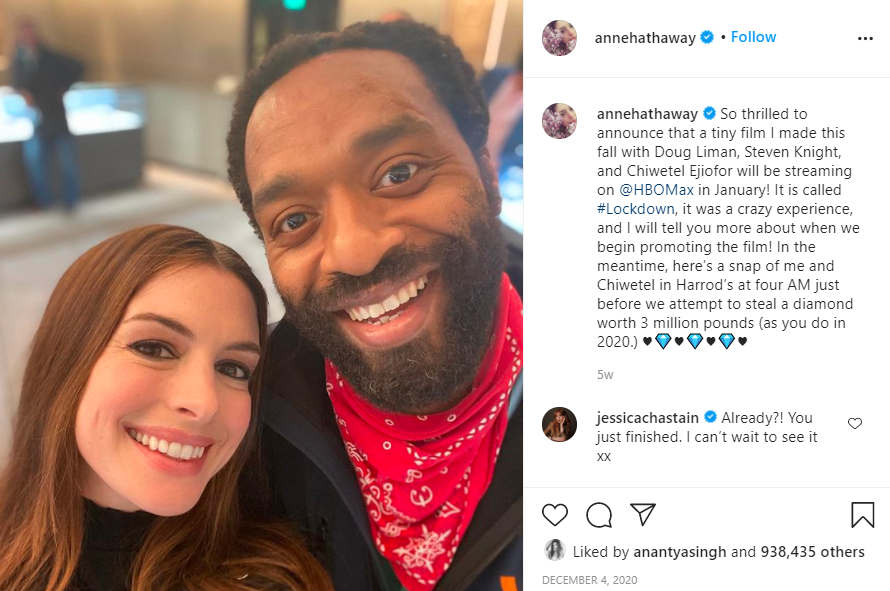 Another location where the film possibly shot key sequences was the residential neighborhood on Portland Street in West London. The area has expensive properties where the prices touch tens of millions of pounds. The scenes in and around Linda and Paxton’s house were probably filmed there. The movie was shot following stringent COVID-19 health guidelines. All crew members wore masks at all times, no matter how warm it got while handling the heavy-duty lights and cameras.

You may be surprised to learn that the director Doug Liman flew himself in a propeller plane from Martha’s Vineyard (Massachusetts) to London. The journey took him two days, but he was more driven than ever because he felt no “resistance” that he would have generally felt while working on a project. There is no doubt that it is the ultimate lockdown film shot in 2020!