Created by George Kay and François Uzan, ‘Lupin’ is a French crime drama series about Assane Diop (Omar Sy), a Senegalese immigrant in France, who is on a quest to avenge his father’s death. Inspired by the fictional character of Arsene Lupin created by Maurice Leblanc, ‘Lupin’ takes us into its literary world set in modern-day France. Diop is heavily inspired by Lupin’s ways and adopts his methods to navigate through his quest. As it turns out, Diop’s father, Babakar, was wrongfully accused of theft and subsequently imprisoned.

The series makes use of flashbacks depicting Assane’s life as a kid and how he got influenced by the character of Arsene Lupin. Season 1 of ‘Lupin’ serves us an engaging story of deceit, thrills, and hidden secrets. Lupin’s modern-day incarnation in the form of Assane Diop made us delve into the details of the narrative. Here’s what we have for you. SPOILERS AHEAD.

Assane Diop works as a janitor at the Louvre museum in Paris. He approaches three loan sharks and hatches a plan to steal a necklace that belonged to Marie Antoniette. Diop disguises himself as a wealthy entrepreneur and visits the auction of the necklace as a potential buyer. His accomplices double-cross him and run away with the necklace but are caught in the ensuing police chase.

It is later revealed that Diop had been planning this heist two weeks prior and had sweet-talked his way into landing the janitor’s job. He had also made a copy of the necklace and ultimately manages to keep the original one with him. Captain Laugier is assigned the case of the missing necklace, aided by a fellow Lupin reader, Youssef. Youssef reads through the heist and suspects that the plot to steal the necklace is influenced by Lupin’s story. 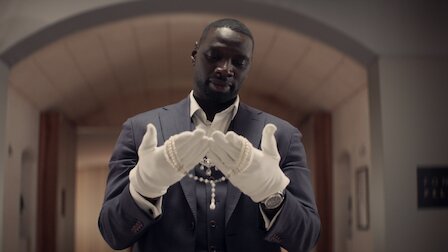 His methods are inspired by Lupin’s stories, to whom his father introduced him at the age of 14. Assane finds discrepancies in the stories about the necklace that are told during the auction. Things are much more complicated than they seem, and Assane decides to uncover the truth behind it and, in the process, salvage his father’s humiliating death. He also encounters many characters from his past that hold the secret of the happenings from 25 years ago.

Assane takes his son Raoul and estranged wife, Claire, on a trip on Raoul’s birthday. He is being followed by one of Mr. Pellegrini’s henchman, whom he manages to incapacitate after a violent clash. Unfortunately, he manages to escape and holds Assane at gunpoint. Assane texts Captain Laugier and, upon reaching the station, manages to get the henchman apprehended by creating a ruse. He and his family walk down the beach where Raoul goes missing.

Youssef identifies Assane and calls him out as “Lupin,” which is where the scene ends. Youssef’s fascination with Lupin leads him to decipher the methods and disguises adopted by Assane in his quest to find the truth. Youssef is ridiculed for his theories, but what this show essentially does is it pits two adversaries, both well versed with the enigma of Lupin. Throughout the show, Assane manages to trick the police and is off their radar.

It is revealed through flashbacks that Assane is adept in trickery, sleight of hands, and is a master of disguise. On the other hand, Youssef entails his investigation through the stories of Lupin and sees a connection with Assane’s methods. Effectively, Youssef and Assane are two sides of the same coin, and season 1 ends on an intriguing note as these two characters come face to face.

Why Did Assane Let Go of Dumont?

Following the leads obtained through his own investigation, Assane finds that Inspector (now Commissioner) Dumont was involved in framing his father. Assane kidnaps Dumont in an elaborately planned method featuring his trademark disguise. The protagonist questions him about the past, but Dumont remains adamant in his narrative that his father was indeed guilty.

In a fit of rage, Assane reveals his identity to Dumont. Realizing his own mistake, Assane probably thinks that this might blow his cover. He cuts a deal with Dumont, saying that he has forgiven him and that there shouldn’t be any repercussions. By pardoning his enemy, Assane actually keeps the bargaining chips on his side. He knows that Dumont is a close ally of Mr. Pellegrini and can help him get details that would work in his favor.

Even though he lets Dumont go, Assane keeps him under control by exercising his leverage as a negotiator. Through lies and deceit, he manages to get details of a journalist, Fabienne Beriot, who could perhaps help him in his quest. Dumont becomes a pawn in Assane’s bigger plan, and by releasing him, he can coax out information as and when required.

Does Juliette Pellegrini Know the Truth?

An interesting character in the show is that of Juliette Pellegrini, Hubert Pellegrini’s daughter. Assane and Juliette have known each other since childhood and have a romantic relationship, albeit one-sided. Flashbacks suggest that Juliette was in love with Assane but couldn’t develop a relationship. Certain scenes also indicate that Juliette is wary about her father’s temper and shady proceedings that she was never a part of.

Even though Juliette knows that Assane is behind the Louvre heist, she hides this fact from her father. This, perhaps, suggests the fact that Juliette is oblivious to the truth and wants Assane to dig deep and salvage his father’s reputation. It remains to be seen how Juliette’s character unfolds as she has her own vested interests in her family’s fortune.

Is Assane Reunited With His Wife?

Assane’s relationship sours with his childhood friend and partner, Claire, owing to his methods and his job (which is never revealed in the show). Claire shows considerable sympathy towards Assane but is also wary that he is into something whose knowledge will not be revealed. There’s an underlying feeling that Assane wants to get back with his family but is preoccupied in his search for the truth. Even though they go on a trip to celebrate their son’s birthday, things get murky, which puts Claire back into a doubtful spot. Assane is yet to find out the truth, and things can perhaps become better in his personal life once he meets his goal.