Discovery Channel’s ‘Undercover Billionaire’ is probably one of the unique shows on our television screens right now. Season two of this intriguing series just premiered, featuring three entrepreneurs betting $1 million that they can go undercover in three different cities and start a new business with only $100 in hand and make it reach the million-dollar mark in 90 days. And with it, we bet that you’re now looking back at season one and wondering about the business established then, right? So, without further ado, let’s find out exactly how the Glenn Stearns funded Underdog BBQ is doing now, shall we?

In season one of ‘Undercover Billionaire,’ businessman Glenn Stearns headed to Erie, Pennsylvania, to try to build a million-dollar company from scratch in just 90 days. He, too, only had $100 in his pocket. Along the way, though, he used his practical knowledge from having been in the business industry for over three decades and connected with a group of local underdog entrepreneurs who wanted to do more than just sell BBQ and locally-crafted beer.

These locals had a vision; they wanted to build a brand that would represent their story with delicious local meals that provided a safe and homely essence, all the while being a bit different, which Glenn gladly helped them create. And so, Underdog BBQ was established at 3040 W. Lake Rd, Erie. The Underdog’s team is still active in turning their brand into something extraordinary, which Glenn’s own $1 million investment has played an enormous role in. 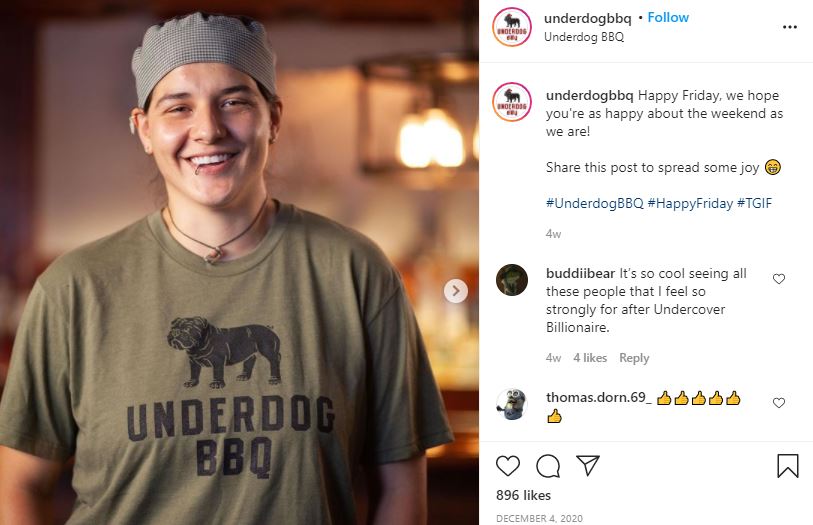 According to Underdog BBQ’s official website, the company has only risen higher since we last saw them on our television screens. Currently, RJ Messenger is the Director of Sauces, Rubs, and Apparel, Ashley Messenger is the Kitchen Manager/Chef, Julie Flack is the Pit Manager, and Jennifer Flack is a Pit Crew Personnel. And together, they have kept the place running as smoothly as possible even in these uncertain times. Of course, we can’t forget Chris Norris, the Social Media Manager of the brand, who has been using the online platform to promote Underdog BBQ as much as possible.

With the tag line “Scrappy in the streets. Saucy on the meats.” Underdog BBQ has done wonders in the food industry. Even though many local businesses have faced a setback due to the global COVID-19 pandemic, they have managed to not only stay afloat but also thrive thanks to their ever-changing ways, quality, and overall consumer satisfaction. Underdog BBQ recently also started giving back to their community by doing sponsored food drops.

The brand remains true to its original mission and vision and keeps on promoting and celebrating everything local and essential to them. If you ever go to their establishment and dine in, you may even bump into some very familiar faces. Most importantly, though, to further expand on their sales and reach, Underdog BBQ has even started offering franchise and wholesale deals on their official sauces, rubs, and apparel.