What does it mean to die? Is death really the end of our existence? Do we have a soul or consciousness that remains active even after our bodies have crumbled apart? These are just some of the questions that Netflix’s ‘Surviving Death’ contemplates and looks to answer. Based on journalist Leslie Kean’s book of the same name, this six-part documentary series explores the different concepts and claims about the ways in which the dead manifest themselves and attempt to communicate with those alive. And one of the most common ones is the phenomenon of near-death experiences, the most famous case of which is of Pam Reynolds.

Who Was Pam Reynolds?

Pam Reynolds Lowery, from Atlanta, Georgia, was an American singer-songwriter who, in the late 80s or early 90s, went to her physician with a complaint that she was experiencing severe dizziness, loss of speech, and difficulty in moving parts of her body. She was subsequently referred to a neurologist, who, after a CAT scan, revealed that she had a large aneurysm in her brain, very close to the brain stem, affecting her overall abilities. Because of the aneurysm’s position and its sheer size, Pam was told that she might not survive an operation. 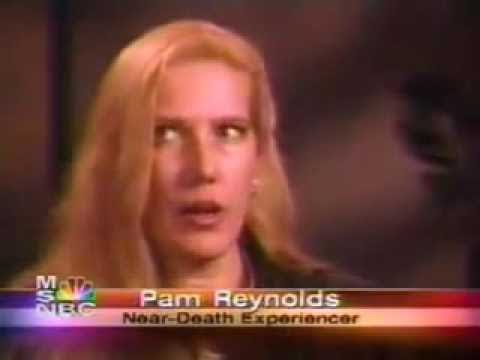 However, Dr. Robert F. Spetzler, a neurosurgeon in Phoenix, Arizona, decided to give Pam a shot and performed a rare procedure known as the hypothermic cardiac arrest while simultaneously removing the aneurysm. During the operation, Pam’s body temperature was kept at 50°F, her eyes were taped shut, the blood from her head had been entirely drained, and small plugs were placed in her ear. Clinically, she was dead. And yet, when she woke up, Pam could describe everything that happened in the operating room with eerily accurate detail.

In 1991, Pam, 35, reported that sometime during the operation, she heard a sound that seemed to pull her out of her physical body and allowed her to float in the air above so that she could see what was going on. She said she felt more aware and that her eyesight was clearer than ever, but the strange part for her was not seeing the unfamiliar instruments being used on her; it was witnessing her deceased relatives. According to Pam, even though she didn’t want to return, her uncle brought her back to her body and pushed her inside once again.

How Did Pam Reynolds Die?

After the aneurysm and what can only be described as a near-death experience, Pam Reynolds lived a good and healthy life, at least for around two more decades. There were many theories about anesthesia awareness and other factors that crossed out Pam’s claims of NDE, but others, believing her, put forward her accounts as evidence in support of the afterlife. But alas, NDE remains a phenomenon that many experience, but it has not yet been proven; therefore nothing can be said for sure.

Coming to Pam Reynolds Lowery’s own passing, she died on Saturday, May 22, 2010, at the age of 53, at the Emory University Hospital in Atlanta, Georgia, due to heart failure. Her memorial service was held in the week that followed at the H.M. Patterson & Son-Oglethorpe Hill Chapel in Atlanta itself.