The show follows a retired wealthy businessman, Neil Bremer of Los Angeles, who decides to run for the post of mayor. Even though the show is set against a backdrop of a political institution, it has little to do with actual politics. Bremer finds himself at a radically different juncture – the newly elected mayor’s negotiations and antics sum up this hilarious comedy. Here’s everything you need to know about the inaugural season of ‘Mr. Mayor.’

‘Mr. Mayor’ releases on January 7, 2021, on NBC. The pilot and the second episode airs back-to-back, starting from 8 pm ET followed by the other at 8:30 pm ET. Season 1 includes 13 episodes, and from January 14, it will follow a weekly release pattern in its regular time slot of 8 pm ET. 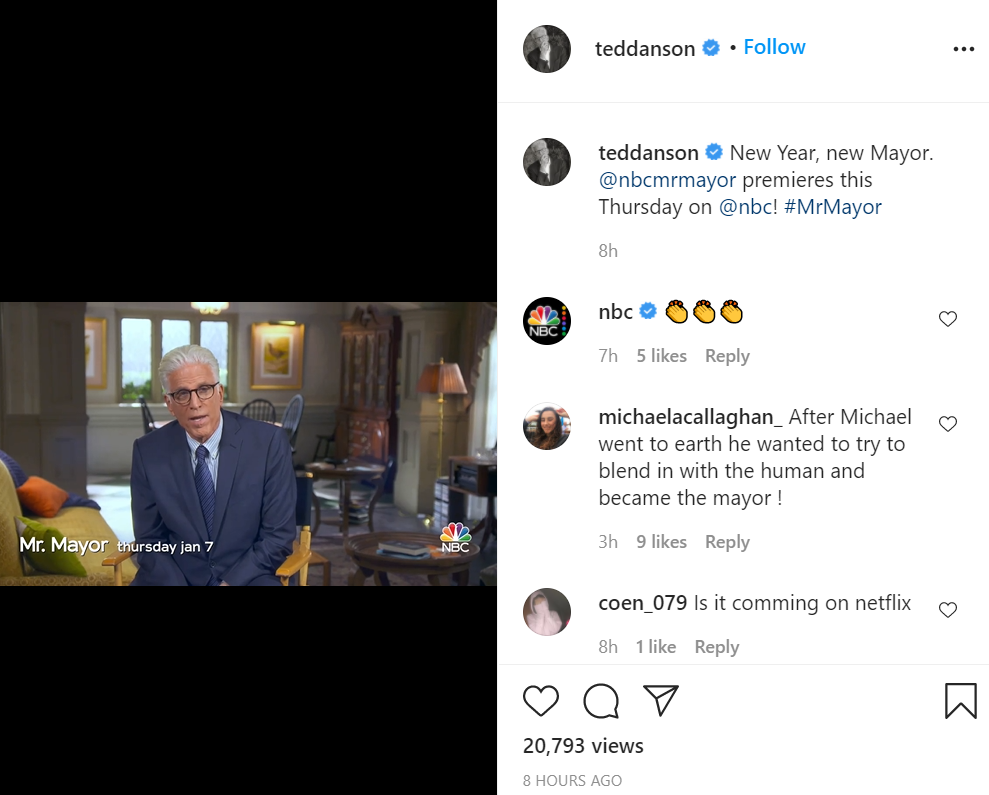 Showbiz veteran Ted Danson stars as Neil Bremer, an affable man and a billboard mogul, who is elected the mayor of Los Angeles. Danson’s charm and persona fit perfectly with the character conjured by Tina Fey and Robert Carlock. Kyla Kenedy of ‘The Walking Dead’ fame portrays the role of Bremer’s daughter, Orly. Other cast members include Vella Lovell as Mikaela Shaw, a social media influencer, who is appointed the chief of staff by Bremer.

Mike Cabellon essays the role of Tommy Tomas, the chief strategist of the newly elected mayor. Bobby Moynihan portrays Jayden Kwapis, an eccentric communications manager whose oddball antics hold up the show’s humorous moments. The Academy Award Winner Holly Hunter features as Arpi Meskimen, a liberal politician appointed as the deputy mayor, who is at constant loggerheads with Bremer over his approach and decisions.

Mr. Mayor Season 1 Plot: What is it About?

‘Mr. Mayor’ is a character-driven comedy that follows Neil Bremer, who is elected as the mayor of Los Angeles. With no prior experience in administrative functions, Bremer finds himself in a tricky position trying to manage the duties and set an example for his daughter, Orly. Bremer is supported by his chief strategist, communications manager, and chief of staff. Bremer’s decisions take up hilarious directions as it is peppered with cultural references coated in oddball sarcasm. The show is not about politics as much as it is about Bremer adjusting to his newfound duties and social interactions.

Arpi Meskimen, the deputy mayor, is a liberal politician who happens to question Bremer’s decision with cantankerous authority, often chiding him at his disposition. Meskimen’s outlook is a caricature of a liberal politician who is apprehensive of new policies and has the tendency to impose their own thoughts. Bremer’s interaction with Arpi highlights the show’s moments as Danson and Hunter’s reel-life chemistry adds charm and wit to the comedic aspects.