Directed by Kevin Fair, ‘Taking a Shot at Love’ is a romantic film by Hallmark. Jenna is a ballet dancer who uses ballet to help NHL star, Ryan Cooper, recover from his injury. While they work together, they help one another get over their respective hurdles in life, which brings them closer. When Ryan recovers, and it is time for him to leave the small Connecticut town, both of them must decide what they want from each other and their lives.

The lighthearted romantic movie tells a sweet story of two people who do not exactly get along too well at first but come to mean a lot to each other. Are you wondering where you can find more information about the actors and the filming locations? Well, we’ve got your back!

The movie was filmed in August 2020, which meant that the production team had to use a lot of artificial snow and work intricately with set designers to create the desired winter scape. The movie was shot in compliance with the new guidelines for film production due to the Coronavirus pandemic. Although set in a Connecticut town, let us see where it was actually filmed!

‘Taking a Shot at Love’ was filmed in Vancouver, British Columbia. Also touted as Hollywood North, Vancouver is a favorite among filmmakers, given the variety of locations and the superior post-production facilities it offers. The city’s attractive tax credits and the fact that it lies in the same time zone as Los Angeles make it a logical choice for filming.

non-descript skyline allows it to stand in for various cities and towns. Many Hallmark films have been shot in Vancouver and the surrounding Greater Vancouver area. Some of the most famous productions to be filmed in Vancouver include ‘Titanic,’ ‘Deadpool,’ ‘Elf,’ ‘Supernatural,’ ‘Lucifer,’ and ‘House.’

The movie uses multiple settings, including a hockey arena, dance studio, streets, and residential properties. In the film, Jenna’s young students are actual students who learn ballet at the particular studio where the ballet sequences were filmed. The movie also hired professional hockey players and took permission from the New York Rangers and the Hartford Wolf Pack to make references in the film.

Filming this movie was an interesting experience for the actors as they felt like they kept learning something new during the shooting process. Luke Macfarlane (Ryan) did not play hockey growing up, although his portrayal of a hockey player is quite convincing. He studied drama at Julliard and has limited experience with ballet. His co-star, Alexa PenaVega (Jenna), was very impressed by Luke’s dancing skills but admitted to being a better skater than him. 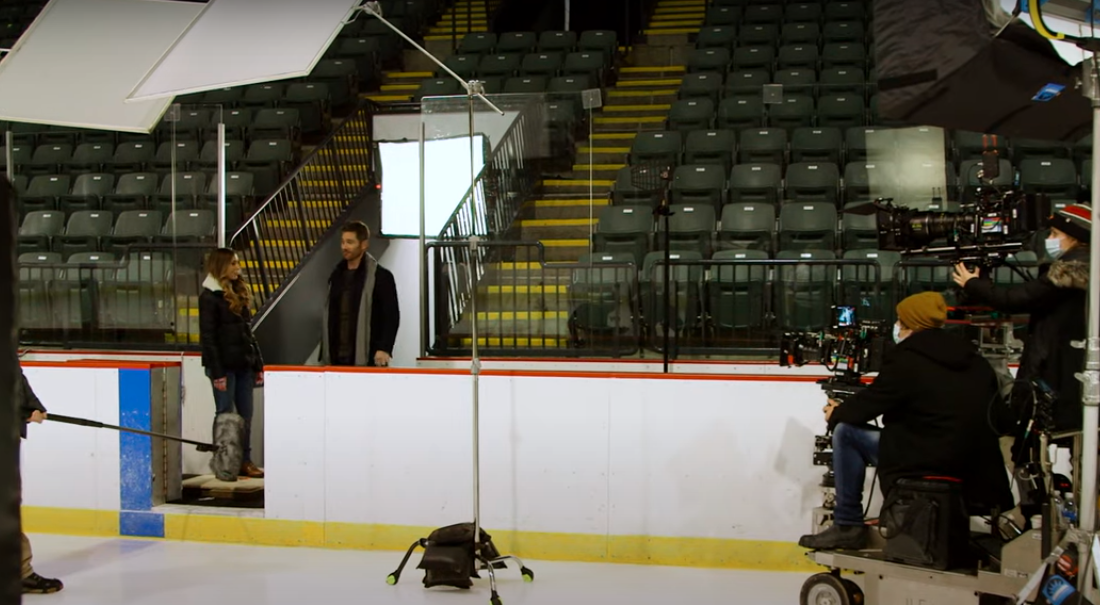 Taking a Shot at Love Cast

Alexa PenaVega portrays Jenna, who is a ballet teacher. She is known for her roles in the ‘Spy Kids’ films, ‘Ruby & the Rockits,’ ‘Machete Kills,’ ‘Odd Girl Out,’ ‘Christmas Made to Order,’  and ‘Unsupervised.’

Luke Macfarlane essays the role of Ryan. The actor features in films and television series such as ‘Brothers & Sisters,’ ‘Killjoys,’ ‘Iron Road,’ and ‘Mercy Street.’ He is known for playing the lead in several Hallmark films and appears in ‘Christmas Land,’ ‘Karen Kingsbury’s Maggie’s Christmas Miracle,’ ‘Chateau Christmas,’ ‘A Valentine’s Match,’ and ‘Sense, Sensibility & Snowmen,’ to name a few. Other actors in the film are Nolen Dubuc, Jarrod Evanyshyn, and Kaiel Barreiro.