Kaley Cuoco is a famous actress and producer who has been in the industry for almost three decades. She became a household name after her breakthrough performance as Bridget Hennessy on ABC’s ‘8 Simple Rules.’ But the majority of her fans know her after she played the iconic character of Penny, a pop-culture savvy and cheerful neighbor to the nerds Sheldon and Leonard on ‘The Big Bang Theory.’ The CBS sitcom has fetched her immense popularity and multiple illustrious awards like Critics’ Choice and People’s Choice Awards.

One of the most renowned personalities in the television world, Kaley Cuoco, recently played the title role in the HBO miniseries, ‘The Flight Attendant,’ which premiered on November 26, 2020. Despite her thriving career, her personal life saw some serious lows during the last 15 years. But her fans and well-wishers can heave a sigh of relief as she is happily married now. So who is the lucky man, and what has their journey been like?

How Did Kaley Cuoco Meet Her Husband?

Kaley Christine Cuoco had come out of an unhappy marriage when she first met her now-husband, Karl Cook. The son of Scott Cook – a billionaire businessman – Karl is an equestrian who has been riding horses since the tender age of 8. In fact, the TV star has felt deeply connected to him due to his passion and affection for animals, specifically horses and dogs. It is speculated that the adorable couple crossed paths in late 2015 or the early part of the following year as they celebrated their first anniversary on February 14, 2017. 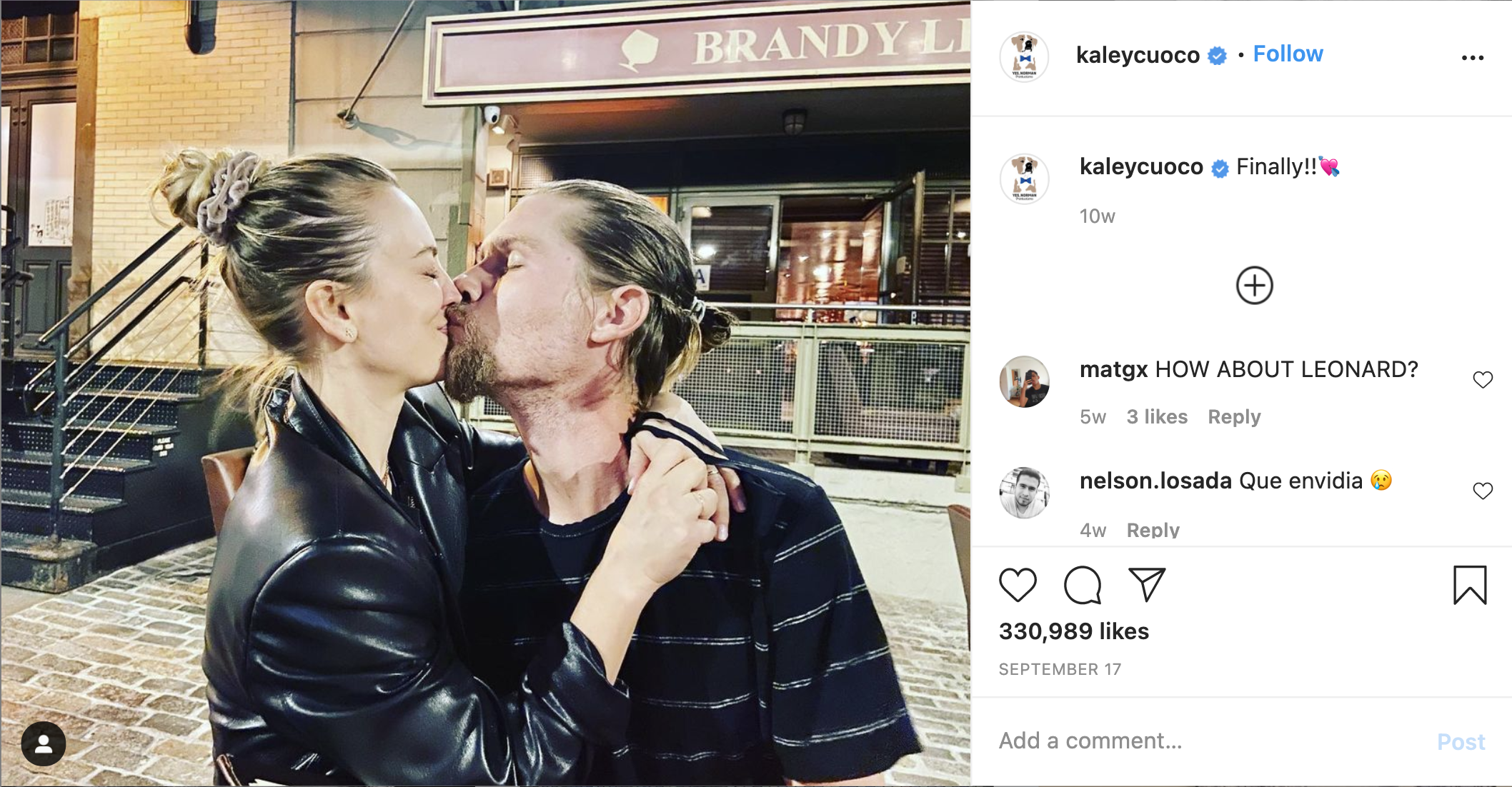 Kaley had separated from her first husband, Ryan Sweeting, in 2015 and got legally divorced on May 9, 2016. But the actress had already made her relationship with Karl Instagram official by posting an endearing and goofy picture of them together on March 26, 2016, following it with a snapshot days later that entailed the caption, “That’s what happy looks like 💗”

Since then, the two have been pretty public about their love for each other and made their first red carpet appearance the same year on September 29 at the Longines Masters Los Angeles Gala. While continuing horse riding together, Karl Cook planned to get on the roller coaster of life by popping the question in the most romantic way. He proposed to Kaley Cuoco on her 32nd birthday, that is, November 30, 2017, and she could not hold back her happy tears.

Kaley Cuoco and Karl Cook took their beautiful relationship to the next level in less than a year after the heart-melting proposal. On June 30, 2018, they shared their wedding vows at a San Diego, California. Their marriage ceremony was held at an alluring yet intimate ranch. After almost six months, the newlyweds celebrated marital bliss by taking a trip to snowy Switzerland in December. However, the quirky pair have had quite an unconventional marriage as living in different places has worked for both of them. 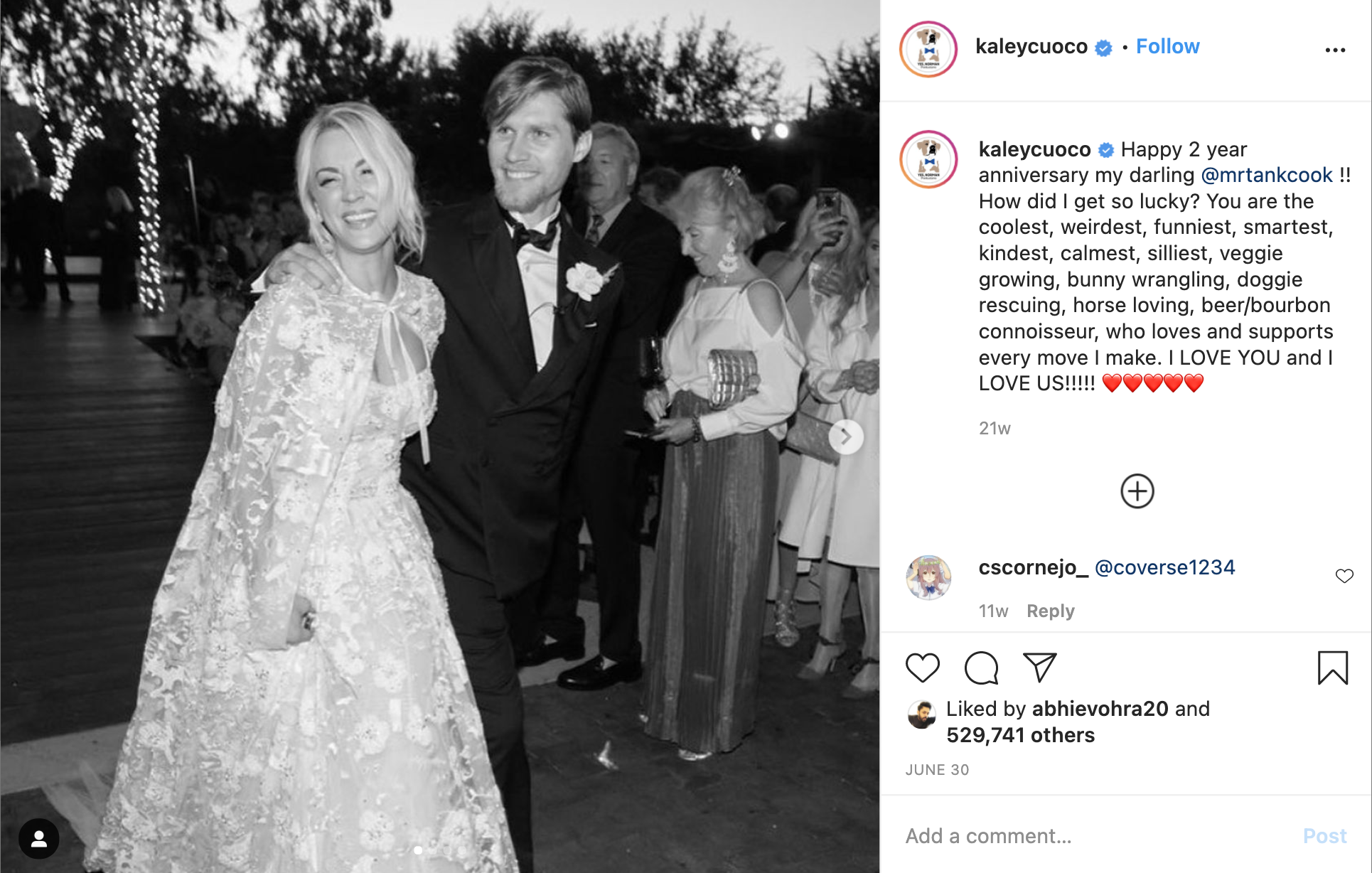 She believes that their marriage is going strong because both relish their private space without taking away the feeling of togetherness. She was finally “forced” to live with her husband under one roof when the coronavirus pandemic hit the world. The couple does not feel “quite there yet” as far as children are concerned but guessing from Kaley’s love of kids, it will most likely be sooner than later. 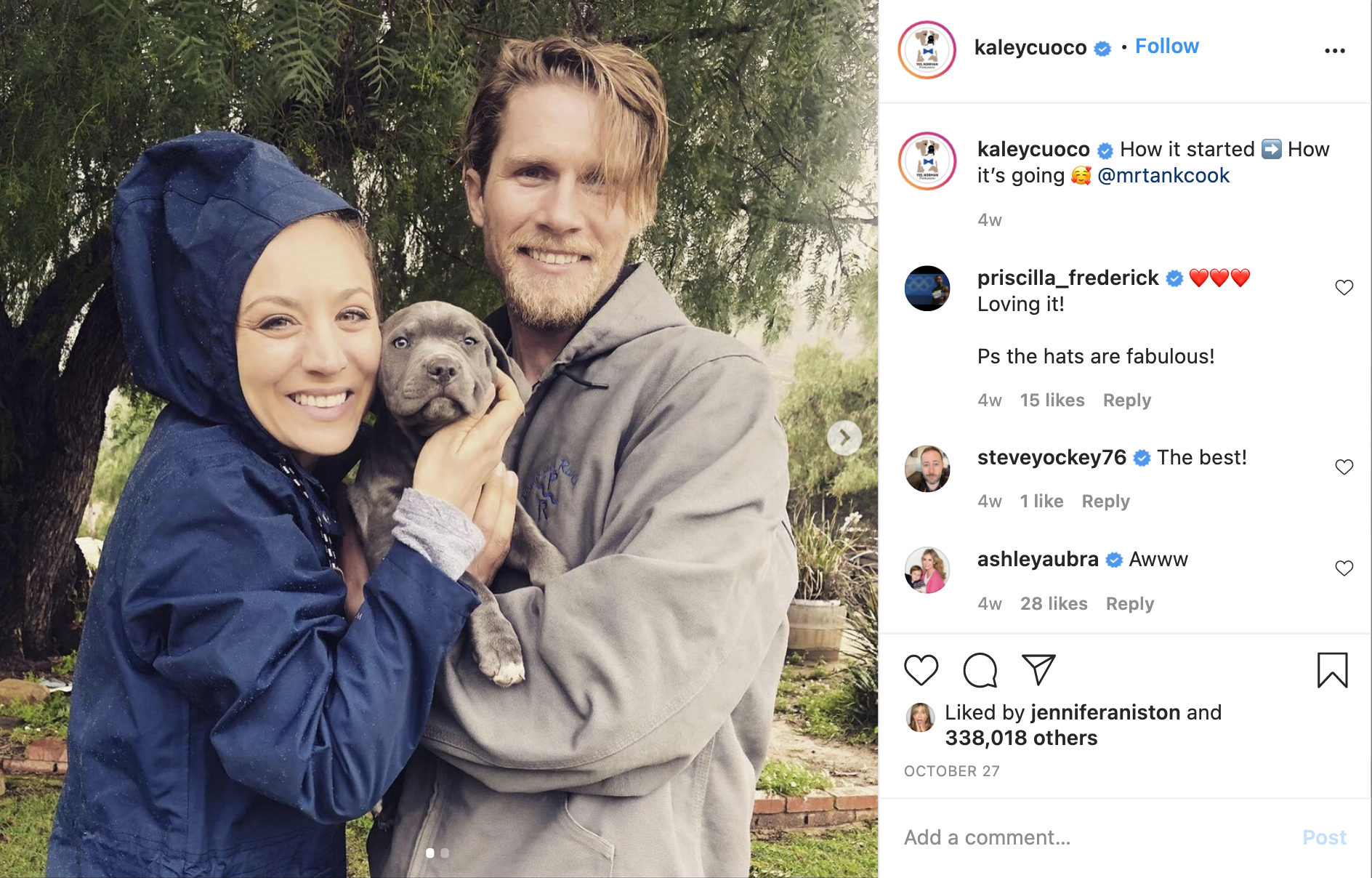 Nonetheless, they feel nothing less than responsible parents when it comes to their fur babies. Animals have always played a significant role in their equation, as was evident during their nuptials. Kaley and her husband even requested their guests to bring along dog and cat donations instead of wedding gifts. How thoughtful! The long list of their furry friends includes horses, dogs, a pair of piglets (Leeroy and Wilbur), and a bunny (Simon Silly Rabbit).

Read More: What is Kaley Cuoco’s Net Worth?