Ronnie Ortiz-Magro was discovered as a reality TV star on MTV’s ‘Jersey Shore,’ which premiered on December 3, 2009. The show and its spin-off series have been hit since the first day and all the original eight cast members are no less than international celebrities as of today. One of them is Ortiz-Magro who worked in real estate before stepping into the world of glamour and glitz. The television personality has often been bashed for his history of tumultuous and toxic former relationships. His verbal altercation with an ex-girlfriend, Sammi ‘Sweetheart’ Giancola, and series of scandalous events with Jen Harley had thoroughly tarnished his reputation. But it looks the new woman in his life is nothing less than a saving grace and Ortiz-Magro seems to be in it for the long haul!

Ronnie Ortiz-Magro became a proud father to Ariana Sky Magro on April 2, 2018. Unfortunately, he had an on-and-off relationship with the baby-mother, Jen Harley, from 2017 to 2019. They officially decided to part ways shortly after the birth of their daughter. But the two tried to work things out and took a trip to Los Angeles. It shocked everyone to see the usually loud blow-out escalate into an alleged domestic violence incident. Harley pressed multiple charges of misdemeanor including brandishing a weapon, child endangerment, criminal threats, false imprisonment, and two counts of resisting arrest. 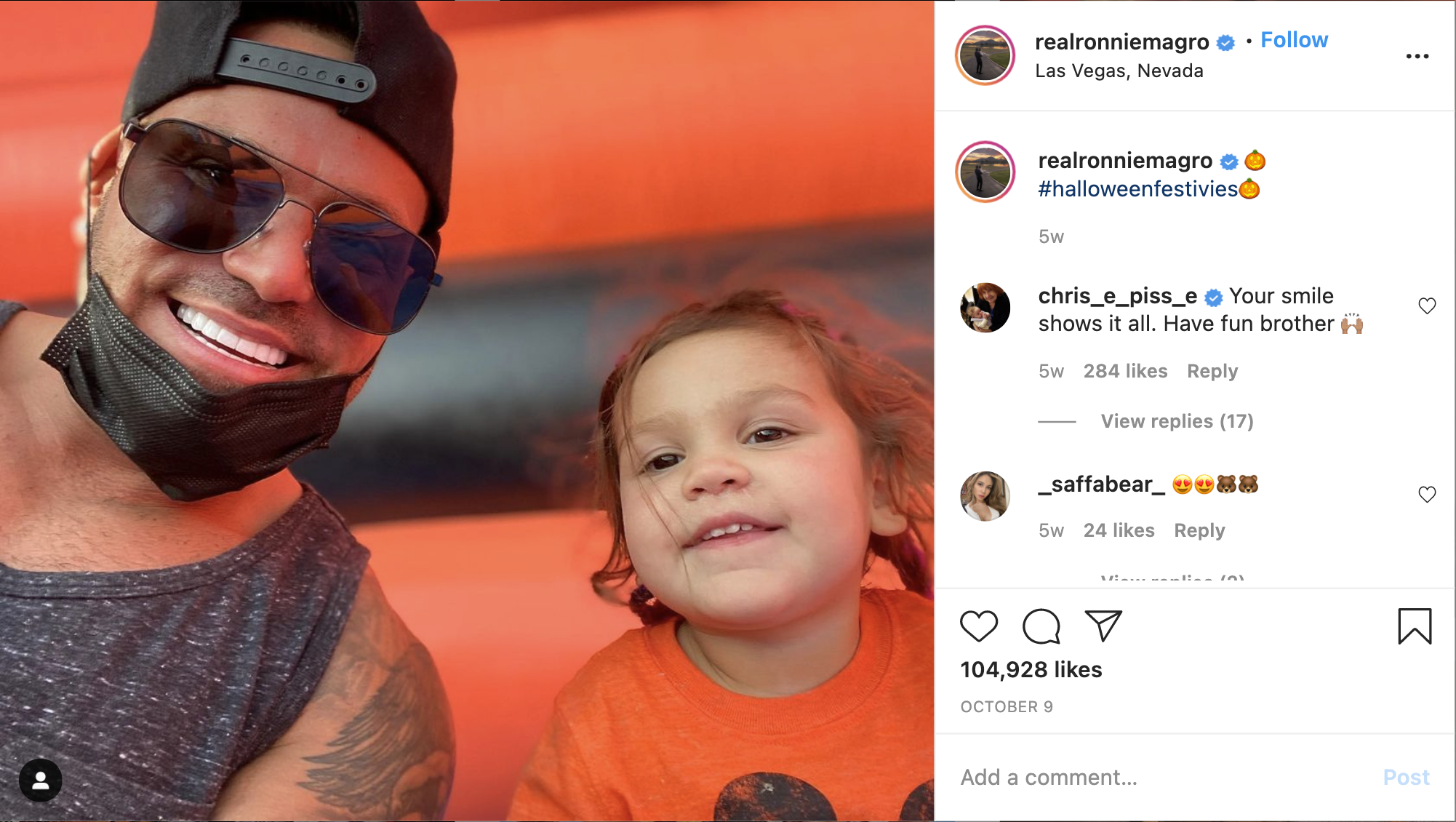 Ortiz-Magro was placed on probation for 36 months due to which he could not see the apple of his eye for a long period of time. During this difficult phase, he assured his daughter on her second birthday that, “EVEN THOUGH I CAN’T BE WITH YOU, I WILL ALWAYS BE HERE. I LOVE YOU SO MUCH! AND WILL NEVER STOP FIGHTING FOR U!” Once he had served his punishment duration, Ortiz-Magro finally met Ariana and has shared several precious moments spent with her on his social media accounts.

Ortiz-Magro and Harley seem to be working on the “All’s well that ends well” principle as they seem to have put the past behind them. Seemingly, he has moved on and so has his baby-momma. Though Harley has not been able to make space for her significant other, Justin Hensley, on her Instagram feed, she did share a photo of him on the story. As far as the ‘Jersey Shore’ star is concerned, he has come out in the open about his newfound love

Ronnie Ortiz-Magro met the charming eyelash technician, Saffire Matos, in February 2020. The reality TV star and his girlfriend were vacationing in Puerto Rico during the last week of October of the same year. He gave his fans a sneak-peak into their sizzling chemistry by sharing a snapshot of them kissing on a yacht near the Dorado Reef. He looks totally-smitten in the picture and gladly substantiated the same by stating during an interview that he is in the “happiest place” of his life. 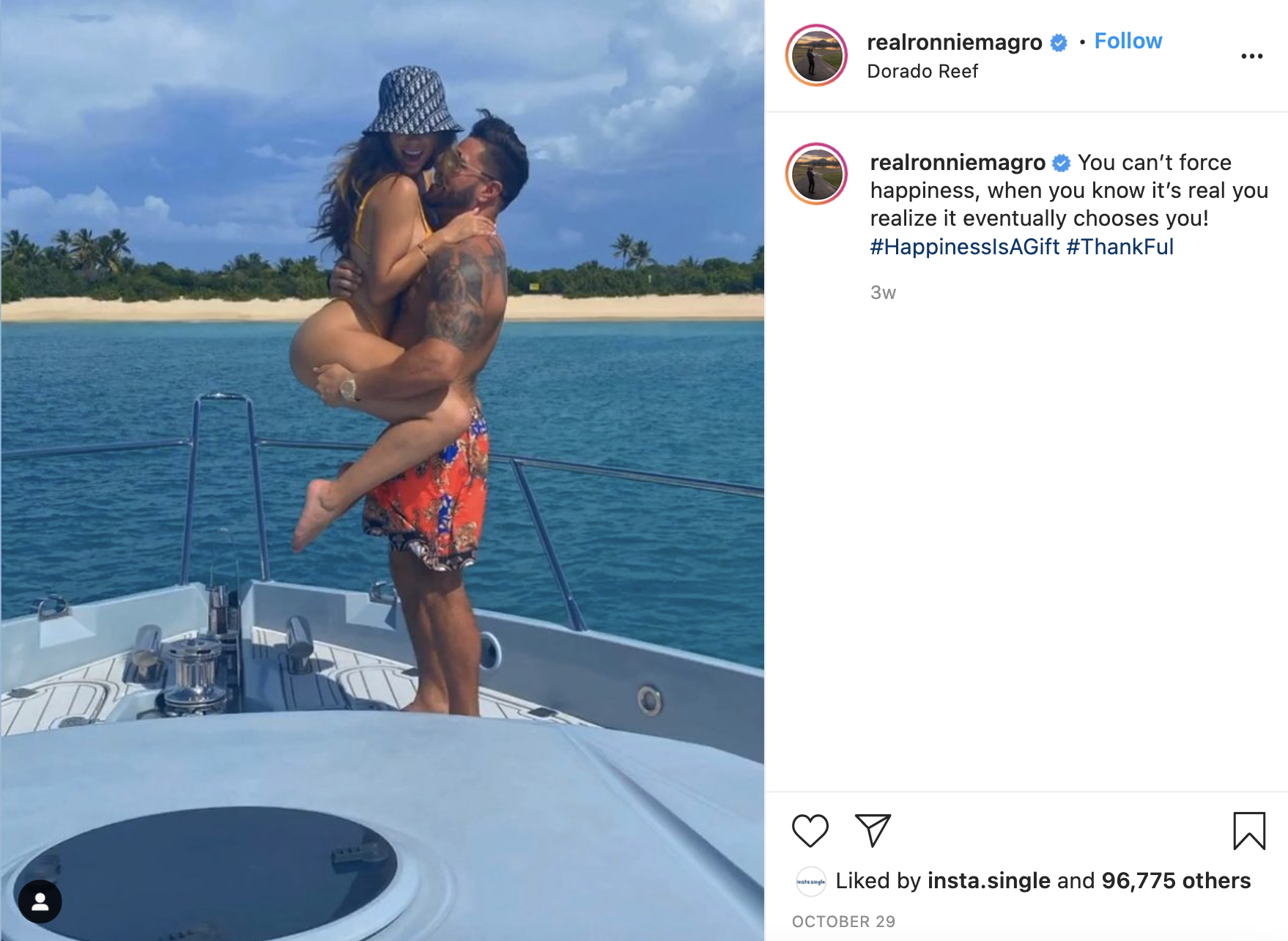 Ortiz-Magro’s love life has been publicly unraveled and discussed for over a decade but never have the viewers or his fellow cast members seen him this “happy.” In fact, Vinny Guadagnino, who was the first one to meet his friend’s new girlfriend, has already taken a liking to her. He also admitted to feeling proud of witnessing the star turn his life around. Ortiz-Magro’s another friend from the ‘Jersey Shore’ team, Mike “The Situation” Sorrentino too expressed his happiness on finally seeing the stabler version of his co-star, who is, truly, “tons of fun” to be around.

Read More: Is Pauly D From Jersey Shore Married? Does He have Children?