‘The Mandalorian’ Season 2 continues the exciting adventures of a masked warrior as he quests his way through the galaxy, in search of the Jedi, so that he may bring them The Child (or Baby Yoda, as the world lovingly calls him). Regardless of whether you have followed the ‘Star Wars’ movies and multiple spin-off shows, ‘The Mandalorian’ is a great, fun watch. While it’s pretty awesome as a standalone show, the latest episode (Season 2 Episode 3: “The Heiress”) takes it to a whole new level of intergalactic badassery which would send fans of the Star Wars franchise into throes of frenzied excitement, all because of an appearance of a major spin-off character that brings big reveals about the Mandalorian’s history.

The Razor Crest makes its way to the estuary moon of Trask, where it crash lands in the water despite Mando’s best efforts to land safely. After they’re fished out by a walker-bot, the Razor Crest crew – Mando, Baby Yoda, Frog Lady, and her eggs – deboard from the fallen-apart spaceship. Mando asks a local Mon Calamari dock worker to fix Razor Crest as the Frog Lady is reunited with her husband. The Frog Man sets Mando on his course to find a local Quarren who knows the way to the other Mandalorians.

Mando and the Child set sail with the said Quarren and his crew after he agrees to take them to where the other Mandalorians apparently are, but it turns out to be a trap to get Mando’s precious beskar armor. In a heartstopping moment, Baby Yoda is swallowed (cradle and all) by a giant sea monster, and as Mando freaks out, three other Mandalorians land on the ship and kill the Quarren crew, saving the lives of Mando and the Child. The new Mandalorian warriors are revealed to be ‘The Clone Wars’ alumnus Bo-Katan Kryse, and her companions Koska Reeves and Axe Woves. They are on Trask to wrest some weapons out of the Imperial Army’s hands, from aboard an Empire ship. 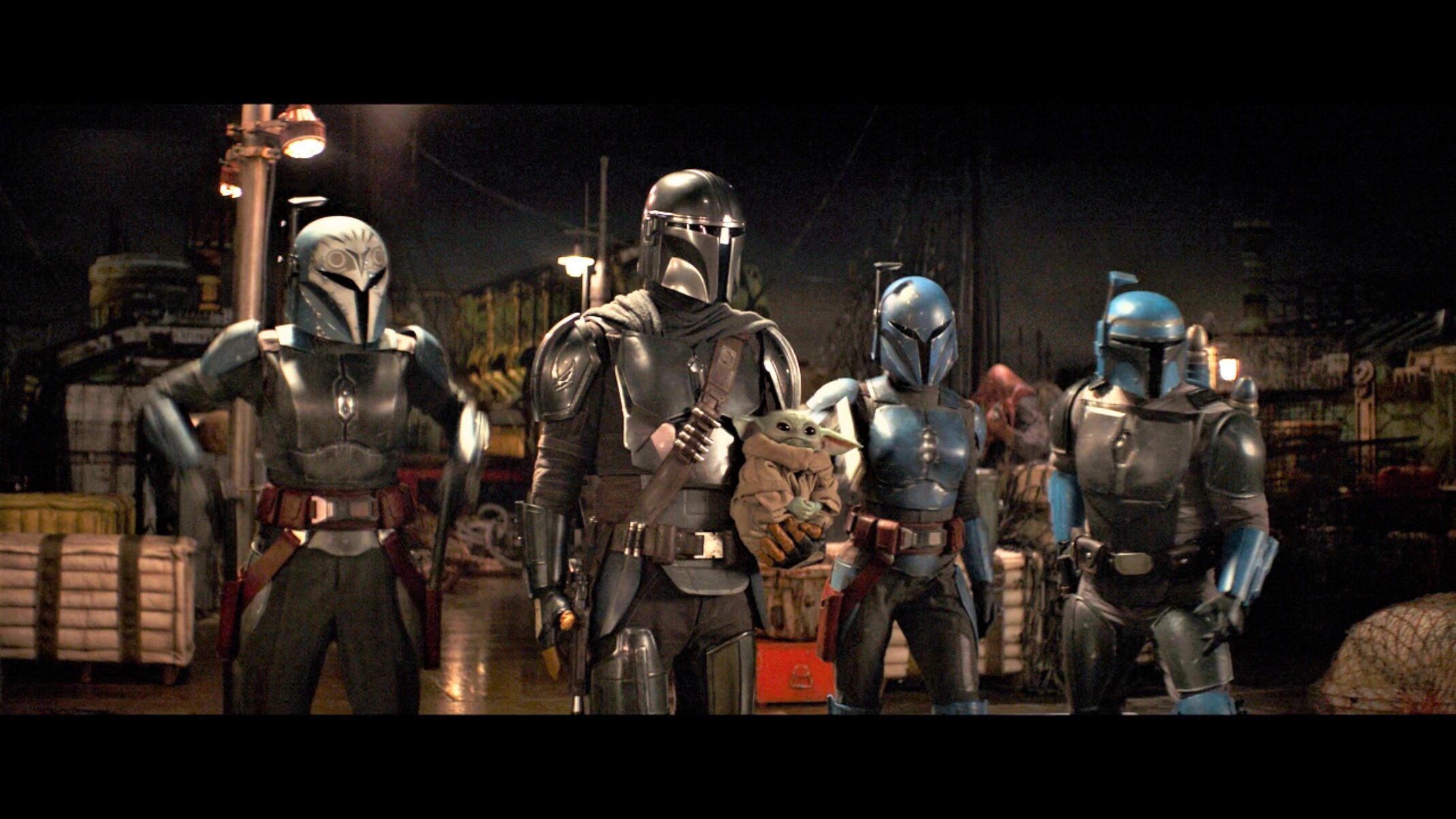 After Mando is shocked to see them all remove their helmets and accuses them of not being real Mandalorians, Bo-Katan dumps some revealing bit of Mandalorian lore on Mando and the audience. Apparently, the group that raised Mando is part of a bigger cult of religious zealots who wanted to restore the ancient way on Mandalore and broke away from the Mandalore society long back to follow their own cult-like ways. Bo-Katan calls Mando a “Child of the Watch” and reveals that most Mandalorians find it okay to take off their helmets as it’s not taboo in their society anymore. She also enlists Mando’s assistance in their mission to steal weapons from the Imperial Army’s ship, promising him information that will lead him to the Jedi in exchange.

This is the first time in this season that Mando and the Child are separated for a short period of time when Mando leaves the baby in Frog Lady’s care to go weapon-looting with Bo-Katan. Mando has, so far in the second season, very pointedly kept Baby Yoda close to him at all times, regardless of how dangerous a situation he was potentially walking into. It is entirely possible that Mando would have taken the Child with him into an active combat situation, had it not been for the baby’s damaged cradle. And so he leaves Baby Yoda to coo cutely at the Frog Lady’s freshly-hatched tadpole.

Aboard the Empire-owned ship, Mando and Bo-Katan’s group encounter a small horde of shiny white stormtroopers, and a truly Star Wars-style action sequence wows audiences as blasters are fired from every direction. Mando makes great use of his beskar armor and barrels directly into a group of stormtroopers blasting fire constantly. It’s not long before the four Mandalorians have control of the Empire ship. The ship’s captain, acting on holographic Moff Gideon’s orders, kills his own men and then himself before Bo-Katan is able to wrangle information out of him about the whereabouts of the Darksaber. Bo-Katan and her companions take the Imperial ship full of weapons and Bo-Katan tells Mando to find Ahsoka Tano in the city of Calodan on the forest planet of Corvus. Mando retrieves Baby Yoda (who did not want to leave his new tadpole friend) and soon the two are on their way out of Trask, aboard a rickety Razor Crest. 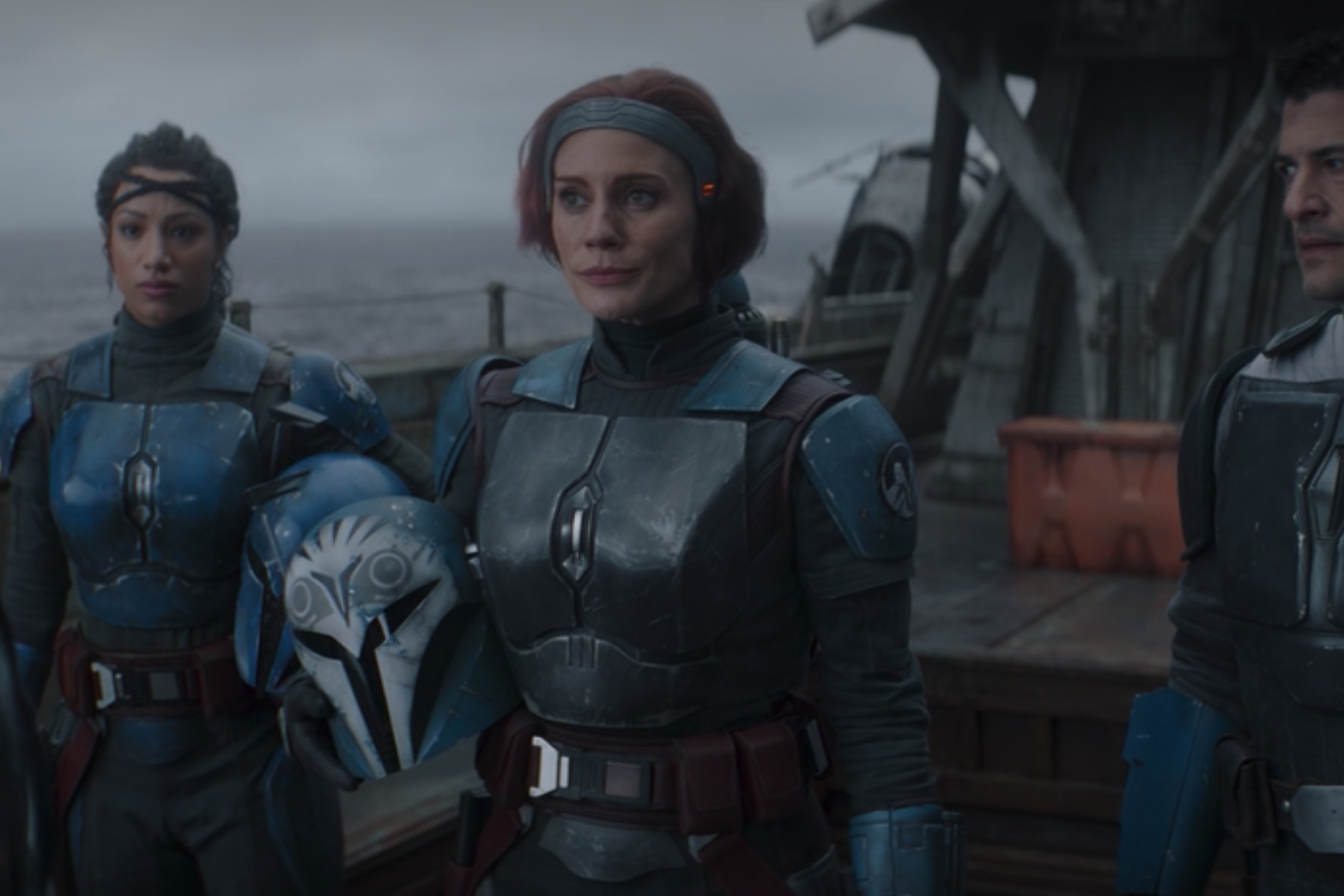 The Fight Against The Empire Remnants

The appearance of Bo-Katan in live-action (she is a major character on the animated series ‘The Clone Wars’) ties ‘The Mandalorian’ to the greater Star Wars universe and Mando gets his first taste of the bigger struggle that’s going on with the Imperial Army Remnants, even after Luke Skywalker and company took down the Empire five years ago. Clearly, the Empire (or whatever is left of it) is still at large in parts of the galaxy and the resistance is still afoot. Bo-Katan plans to take back the Darksaber (the weapon she once wielded but is now carried by Moff Gideon) and reunite the clans of Mandalore so that they can claim their homeworld back from the Empire. The fight for Mandalore, a planet considered cursed by Mando and his pals from the Watch, could become the ultimate battle for Mando. Fans can totally see him become a part of the greater cause, helmed by Bo-Katan. This episode’s ending serves to show viewers where exactly Mando fits into the larger storyline of Star Wars.

Raised by a Cult of Purists

It also gives such great insight into Mando’s upbringing and sheds a harsh light on his beliefs. So far, Mando believed “This is the way” but this is clearly not the way. The episode’s tight runtime of 30 minutes does not allow time to dwell on the fact that Mando was raised by a cult of religious zealots. But we are sure this revelation will have an impact on Mando, to the point where he might even choose to give up the old ways and embrace the newer ways of Mandalore. Does that mean we might get to see more of Pedro Pascal’s handsome face if Din Djarin chooses to take off his helmet?

And finally, let’s talk about Bo-Katan’s tip to Mando – to find Ahsoka Tano on the planet Corvus. A bit of background here, for those who only watch ‘The Mandalorian’ as a standalone show – Ahsoka Tano is another character from ‘The Clone Wars’ and is a former Jedi padawan of Anakin Skywalker. Yes, the same Anakin Skywalker who turns to the dark side and becomes the dreaded Darth Vader in the movies. Ahsoka Tano used to be Anakin’s padawan some 25 years ago, which is when ‘The Clone Wars’ is set. Now how Tano fits into ‘The Mandalorian’ story and what that means for the Child and Mando’s journey remains to be seen.